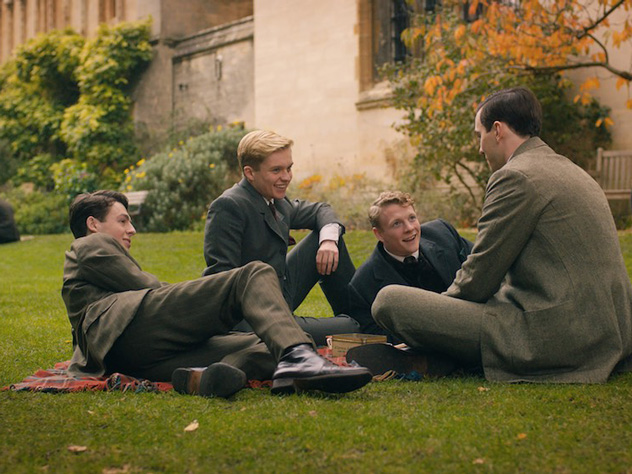 Being Around People Is An Art

I’ve seen Tolkien, the movie, last night and it made me think about people, about how we interact in the 21st century.

But wait! What do people have to do with Tolkien? Except that he, too, was ‘people’.

Well, for those who haven’t seen it and are not planning to either because, let’s face it, who’d want to go deeper in an already geeky subject, Tolkien is a movie centered on John Ronald Reuel Tolkien, the author of the fantasy trilogy Lord of the Rings (LOTR), as well as several original languages and mythologies he used in his books.

I won’t go deeper into why LOTR is so much cooler than Star Wars and such ridiculous things. It just is, alright?

If you’ve watched the extended movie version, with director’s comments, you probably understood. LOTR is more than just an epic story, it’s details, lots and lots of details about architecture, about language, about clothing and posture. Tolkien has thought about all of it. Such a mind he must’ve been! Ever since I saw/read the trilogy, I always wondered how he was in real life. A great grandfather, that is for sure!

Please excuse my derailment, it happens when I speak of people I admire.

Going back to the movie – it portrayed him and the times (begging of the 20th century) he lived in so well, so close to what I have imagined about him, it’s like the movie was a part of my imagination. What I loved the most about this movie was the way the characters interacted. And this is what this long intro was for.

Tolkien had three comrades. The circumstances of them coming together are normal. School-related. They were all highly educated, artistic, sensible people who had the luxury of following their passion and did so elegantly. They all belonged to prominent rich families (all except for Tolkien who was an orphan) and were determined to change the world through art. Let me repeat that to sink in: they wanted to change the world through art. How naïve, sublime and very brave is this motto?!

Have you ever had the chance to such friendships?

Have you ever left a conversation with a friend feeling enriched, feeling like you have actually achieved something? It’s almost like drinking a good cup of tea; it leaves some sort of an aftertaste in your mouth, it gives you something to think about, it makes you believe that not all hope is lost and, however you are, you have a role in this world. It’s almost like it gives you that superpower of modelling clouds into a shape of your own preference. For these are the conversations about ideas –- kind of like clouds. You can’t really put your finger on them, but they sure look pretty when expressed.
And that brings me to another point.

There is a saying about that. Small people talk about other people. Wise people talk about ideas. We forgot that being wise is an option as well, so we are not wise anymore. And when we are, we feel awkward about it.

I don’t know how you are, but I can only afford to be awkward around very few in my life. And it wasn’t until I got well into my 20s that I realized that being awkward, as per the above definition, is not something bad, it’s actually something to be proud of or cherished, at least.

In the 21st century, communication, and with it friendship, has been tainted by consumerism, by minuscule attention spans.

Don’t get me wrong, I generally tend to focus my conversations and be to the point; it’s just that sometimes I like this point to step outside of this daily routine, out of the digital tangible realm, out of the every-day mess.

So, no, I can’t be awkward around too many people.

Sometimes I wonder why is it that I am not more ballsy. Why is it that I don’t refute completely those who … don’t bring much to my table? Then, I am reminded that even so, I tend to come across pretty rough, even so, some people are afraid of me being so dismissive. And then I think this is really the direction we are going to as a humanity – when combined, we become snowflakes and we complain about it to each other. Isn’t this circle beautifully complete?

The Feistiness Of Bees