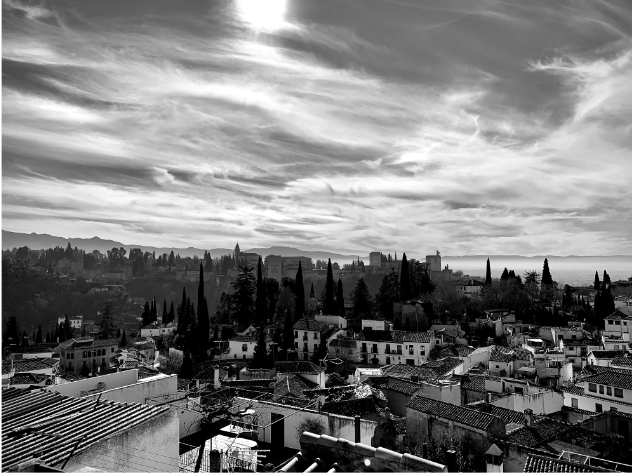 After the success our blog had on our trip across Indochina, we decided blogging is what we will do when we are away.

This year’s holidays we decided to spend away from it all in the South of Spain. Away from wrapping paper, plastic madness, mindless shopping and, most importantly, away from Mariah Carey (Have you seen her recently? She is like an inflatable doll who likes luxury. She is like a luxurious inflatable doll. And also, what is it with that chips commercial on TV? Yeah right, like she’d ever eat them!). Please excuse my digression, it’s just impossible not to when, last year, after New Year’s, I was stuck in a hospital bed watching Mariah’s own reality TV show.

Don’t ask me why I decided we should come to Granada. I must have not thought much.

I think I booked the tickets just as we arrived back from our Asia trip. I just needed something to look forward to. It was some sort of a guarantee. “Alhambra is beautiful”, they said. Because everyone comes here for it.

Well, it might be, but we decided not to go there. But I am feeling this is another story. So let me focus.

Today we roamed the tiny streets of Albacin.

It’s beautiful. Very picturesque. I especially like the doors of the old buildings. So we walked and walked. We got to a white church and enjoyed a pretty view of Alhambra. Misty valley. Pretty roofs.
We took some pictures with all the mad crowd there. Got to tell ya, there are a lot of tiny Asian people with huge cameras. I mean. I get it, you want to take pretty pictures but … how is it that you come all the way from Japan, for example, and somehow you feel like the three-kilogram weight the camera adds to your luggage is justifiable?

Oh, I have an idea. It probably compensates for the tiny clothes. Smaller people, smaller clothes, lighter clothes, ergo more weight available for the camera. Anyone got an idea about this?

From the white church, we walked some more.

Up-up we went like hobbitses. Until we got to another church. A brownish one. You do understand I am too lazy to look for their names, right?
At the brown church, there were fewer people because the way up was pretty hard to endure for the fragile feet of the rich old people, or the ones with babies. So there we were, only some couples around, a hippie chick with a stray dog that had found shadow next to her (I quote “Nice dog you have, he is smart too, he sits right in the shadow.”, “Si, smart dog, but not mine.”) and a penetrating smell of marijuana. Could it be coming from Alhambra, across the valley?

I am pretty sure we saw a few people, probably rich assholes who came to Alhambra on a private tour for some 150 GBP. Yes, we checked.

On a closer look, we discovered that somewhere under us, some black dudes were sunbathing in some rugged chairs.

You know, chillaxing, smoking a doobie, drinking a whoopie. Don’t know what a whoopie is, but does it suggest beer?!

On an even closer look, on our way back down, we realized that the small caves or grottoes we saw surrounded by improvised fences were, actually, inhabited. Hippies, some dudes that looked like migrants or refugees, let’s say that I think that was the bad side of town? Only that it had the best f*cking view (see the picture above). I am giving it five years until hipsters come and prices explode. What am I saying, we were there. Are we hipsters?! Should I ask Alin to shave off his beard?

We came off the hill to the places where mortals eat.

I had an awkward salad that had shrimp, avocado, tomato, green leaves, and some nice sauce. The best in it was the honey melon. Yes. It was disgusting. Alin said, “you and your food choices, always a mystery”. I have nothing to say for my defense.

Then we discovered some tea-shop.

Royally ruled by the biggest cat I have ever seen. Good baklava. Bitter tea. But that’s because it was Arabic. Whispered: and they are bitter.

In the middle of all the legs of all the people walking up and down a narrowish street by the river, we found a fountain. A couple was sitting on it (it was really small), so we sat next to it, on the sidewalk. Not sat but laid. In all our grandeur. The couple felt kinda sorry for us so they offered Alin wine. Because he is some sort of a Mormon undercover, he refused. I was laying so I didn’t catch the moment when Alin was offered so I couldn’t intervene and excuse my non-alcoholic excuse of a husband.

Then we started walking the long walk home.

We couldn’t do it for long so we stopped on a corner, sat on a bench this time. And good we did because this is how Alin took some magical photos for which I secretly hate him because he is so good. You can find those pictures on our Instagram account. Because every good article backlinks to somewhere, it may just as well be ours.

Aaaaand we are at the hotel. I am writing this, very un-inebriated, I swear.

But let’s hope that is not something I can’t change before I go to bed. Thanks for reading and, in case you missed it above, check our Instagram for some pictures.

This Christmas Is About Courage.