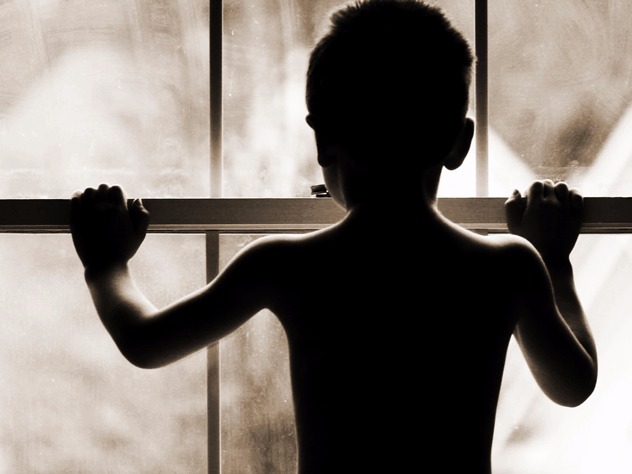 It is quiet now. The girls fell asleep hugging. Sometimes their breath synchronises. Every now and then one of them sighs and gets a new breathing pace. The room seems bigger. It smells like chicken soup from the kitchen.

Outside everything vibrates with sound of church bells. It is Sunday and at this time of the day people come back from Mass. The little boy climbs up the window. From the fourth floor, people look like ants. They keep appearing from around the corner. The bells stop. The people disappear. A stray dog is licking a plastic bag. Soon the animal gets bored and starts chasing a curious bird. Now is really quiet. The wind starts blowing, carrying with it the soft smell of linden flowers. The little boy is leaning on the metallic frame of the window and spits in the wind.

The dog is back and this time is barking like mad. Some neighbour downstairs unleashes a curse, but the dog is careless. He is barking at a man pushing his bike on the sidewalk. The man is slow and looks tired. He stops in front of the building and looks up. It is Father.

The boy quickly gets off the window. His feet breaks the cardboard box he stands on and that breaks the peace. One of his sisters is awake now. She puts her clothes in order.

“Father is here”, says the boy while rushing out.

In the kitchen, mum fell asleep with her head on the table. The room is very steamy. Something is madly boiling on the stove in a blue pot.

“Mom”, the boy shouts, his eyes terrified.
Mother understands.
“Is he drunk?”, she asks, wiping her face to get rid of the sleep.
“I… I don’t know, he wasn’t riding his bike.
“Get in the bedroom, wake up your sisters and stay there, I’ll bring you food later. Let him eat and go to sleep. I made chicken soup.” She smiles crooked and gently rushes the little one out of the kitchen.

In the bedroom, his sisters are awake and whisper something to each-other. Someone is coughing on the staircase. Soon the apartment door opens wide.
It is Father. He is drunk. He holds a newspaper in one hand and a bottle in the other. A large package of biscuits is hanging out of his good blazer. His blue eyes are half closed and the glasses are not right in place. What a funny broken robot!

The sisters look a bit frighten. The oldest is nervously combing a doll while the other is ripping of a book in small pieces.

It is unusually calm in the kitchen. No shouting, no screaming.

The boy opens the door. His mum is helping father to take off his fancy trousers. His legs are long, white and a bit hairy. Right now he looks a bit funny in his briefs. Can those flimsy legs really support his weight?
On the table there is a plate with chicken soup. The steam blurs his glasses. He takes them off and mumbles something.

“Where is the bread, god damn it? And you, what are you looking at?”
“Leave him alone. The bread is on the table. You want me to cut it? You, get back to the room.”
“No, stay there. Give him food.”
“I will feed them all after you finish.”
“You never listen, do you?”
“No, you never listen, it is Sunday, I was working the night. I am tired and you are drunk. I am tired of you.”
“Are you tired? You want to go? Go!”
“Eat, you are drunk. Again.”

She is nervous and cuts the whole bread in pieces. Her hands are shaking, so she leans against the stove. Few tears are dropping in the pot. She sighs and wipes her face with a kitchen towel.

He kicks the plate off the table. It makes a metallic noise. A carrot slides on the wet floor, out of the kitchen.
It is quiet again, but not for long. Father hits the table with his big hand. Then he gets up and hits mum over the table. The boy is in the hallway, behind the kitchen door. Through the keyhole he can see Father holding mum by the hand and hitting her.

He grabs the knife. It was bad before, but never this bad.
The boy opens the door and braces mom’s foot, crying. Father is standing with the knife in his hand in the middle of the kitchen. The two sisters appear in the hallway, holding hands. For few seconds it is quiet.

“I am leaving, I can’t have it anymore, do what you want with the children”, says mum.

Father is now very angry and wants to stick the knife into something. He loses his balance and misses the bread on the table. The knife gets stuck in his own leg. It is quiet, nobody makes a sound. Father is looking at the knife, he is speechless.

“Go to your room, send your sister to the neighbour, we need an ambulance”, says mum. The big sister runs out quickly.
The boy is playing with the carrot in the hallway. Soup on the floor mixes with blood. The noodles look like little snakes resting in the bizarre puddle.

Someone opens the apartment door. It is the fat neighbour holding a white towel. He is followed by his wife wearing a bathrobe.

“It is your fault, you made me angry you whore, you are going to pay for this”, shouts Father, while being helped away.