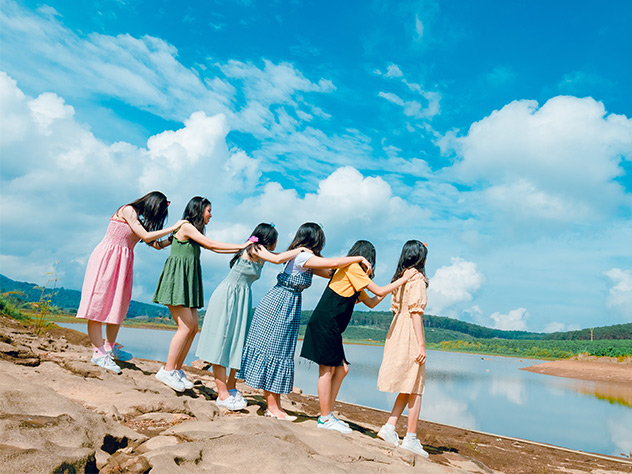 Since the beginning of time, my time, I’ve been a sucker for people. Like my father, I put friendships high on a pedestal, regardless of what they offered me. But time, dare I say, it’s a better teacher than any parent: It has taught me that like people, who are different, friendships are not all equal.

It was a hard lesson.

Especially because I am an idealist and I always thought that what I put into friendships had to come back to me in the same shape or form. It’s an elementary, almost childish, a logic I thought characterises exchanges. But I was to be proven wrong. Changing countries three times, changing jobs, put a strain on the relationships I had with the people I hold dear. It was the kind of strain that, looking back, I think it shaped how I interacted with my friends.

So I came up with a list of the types of friendships I have/had if you will.

Sure, it sounds a bit clinical and maybe psychopathic, but hey, nobody said I was perfect. I can assure you, however, that my fridge is full of non-human meat:).

First, are the obvious friendships.

People who are right there. Visibly. Vividly. Wholeheartedly. Monthly, weekly, if not daily. They are not many and they tend to change as I grow older. It’s normal. Affinities change, routines change and so do friendships because people respond differently to situations. It’s interesting how, as I have become more mature, maybe more educated, I am more prudent when connecting with people, but when I do, it’s a sure thing.

Second come the friendships lurking in the shadows, a peaceful army of introverts.

These might be old friends that slipped between the cracks or maybe people who’d rather keep it to themselves, not wanting to burden and not knowing that their presence is not a hard thing to bear. They do, however, show themselves every now and again, only to remind me that there is a reason why we are friends in the first place.

Third, are the attention whores who never really gave anything but always took in what I thought was our friendship.

Of course, it is too much to call them friends. But they were, once, when I was a little younger and a little more naive. There are people who don’t serve any purpose but to fascinate. Like mere statues in a human museum, they are a beautiful display of perfection and hollowness at the same time. ‘Rapture’ is the word that comes to mind when I think of them. They always had something that kept me hooked. But once it wore off, I realised that there was no reason to hang around.

Last, are the friendships I don’t know I have.

Ever since I started this blog, I had the pleasure of meeting, even if only virtually, some incredibly nice characters. People whose warmth exceeds pixels and emojis. I have met some face to face and our conversations were endless. I think it’s that Facebook bubble everyone is talking about. Who said that is a bad thing? I am very grateful for it.

To be honest, growing up sucks. If for nothing else than for making me make lists like this. But there comes a time when you need to do this. Because hoping hurts, because as beautiful as they are, people hurt, they disappoint, and, as a result, friendships develop and perish. And it happened to me more than once to cry over it. So what do I do? I make lists and build walls for there is no place for idealists in this world.

Our Generation Has It Rough