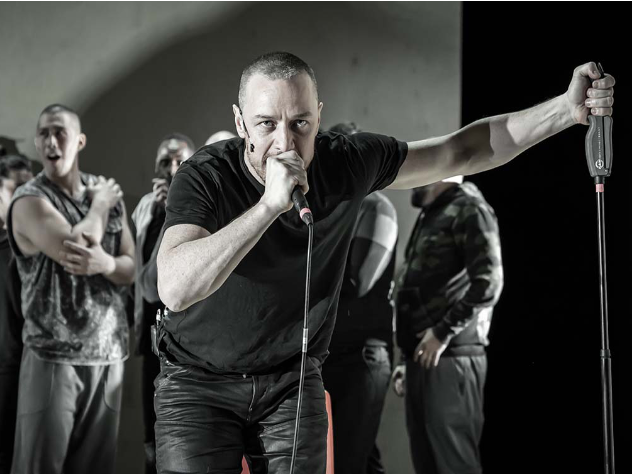 I know, I know, it sounds like a total clickbait and I am sorry but oh, James! At the weekend we went to see the brand-spankin’ new Cyrano de Bergerac in a brand new and modern interpretation of some people I am too ignorant to remember their names and don’t want to pretend that I do by googling them.

One of the perks of living close to London is that we get to see famous actors doing the hard type of acting — theatre. A while back we witnessed Clive Owen spitting on the stage in ’The Night Of The Iguana’ and boy oh boy was that awesome! This time it was Charles Xavier, erm James McAvoy playing the smart, yet huge-nosed-and-ugly Cyrano de Bergerac.

There is something about James and it’s not his height.

He is … energetic, a bit of a maniac (I must be thinking of the movie Split), somewhat handsome and a whole lot of a man. I don’t know why, but in spite of his negligible stature, you can’t really neglect his presence. He is there even when he is not.

Yep, you got that straight. The play is around three hours long, filled with a raging verse that falls like a waterfall, sometimes in rapps; it doesn’t seem to have been written taking into account the actors’ need to catch a breath.

In the middle of this verse extravaganza, James triumphs. He really seems like he is surfing the mad waters of a complex Cyrano, who is in love with Roxane, his beautiful and very refined cousin; very gifted with words, with a short temper and considering himself ugly because of his huge nose, Cyrano can’t sum up the courage to confess his feelings. Instead, he helps the young Christan, a less literate man, to woo Roxane with words.

One lesson I learned from Cyrano

It all ends with a lot of people dying and me reconfirming the idea that all the education in the world won’t make up for what balls can give you — the courage or madness to do what you feel it’s right. Yes, this is how I justify my messy life choices. And I will not cease to do so. I mean, Cyrano didn’t do it and look how miserable he ended up.

Another lesson I learned from James

Size doesn’t matter. 🙂 I kept on saying this but nobody believed me. In this particular case it’s not about that size but still. This guy is amazing by the amount of energy he puts in. I don’t know why it comes as a shock. Maybe because I got so used to him being behind the screen and somewhat damped by it.

This Christmas Is About Courage.