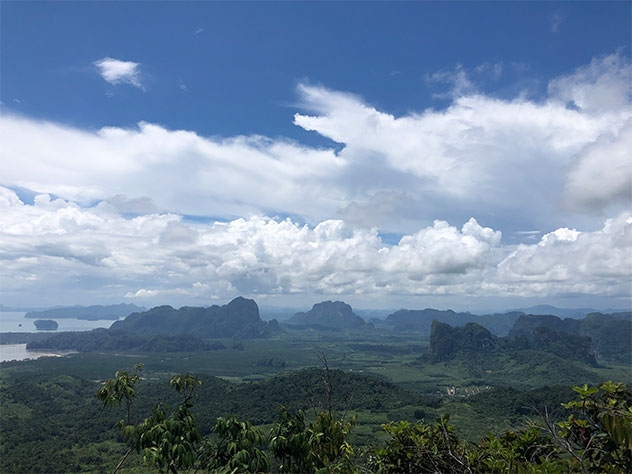 As I start writing this, Hercules Poirot has, once again, solved the crime form the Orient Express. I had no idea it was such a tragic story. “What did you read in your childhood?!” wonders Alin.

Today was exhausting. We made our way on a scooter to checkpoint Mu Ko Phi Phi National Park. We read online there was a cool vista from the top, the Dragon Crest or Khuan Sai.

Almost 4 km on foot through the rainforest. Easy peasy?

Naaaa. It was bloody exhausting. Not really the hike, but the humid air and all the sweating. Alin gave up. I think it’s because his breakfast was mostly rich in protein. Rookie mistake. So halfway through he returned and waited for me at the base. He was to experience other funky stuff. See below.

Up up I went just like Frodo and Sam and Smeagol.

Only that it was just me and Veronica, a nice Polish girl I met on the way. She is traveling alone through Thailand, her first Asian country. We talked about how it is to travel alone and how much her parents resented the idea at first and how she keeps sending them pictures every day, you know, for reassurance.

The vista from up there is simply breathtaking. Thailand is extremely beautiful!

I made my way down by myself, a little bit stressed that Alin was down there and I had no way to contact him. Veronica wanted to stay a while longer, so we said goodbye on the Dragon Crest.

Going back through the rainforest by myself was strange and a little bit spooky. There are so many types of noises we are not familiar with because we live the city-life, so many different types of insects. At some point, I heard, what seemed to be sirens. I thought “Ah, it’s nice the rangers are making noises to guide tourists who get lost” or something of the sort. But I got quite close to what seemed to be one of those sirens. I grabbed a bamboo tree on my way down the trail. The tree shook a little under my grasp and the siren noise, that was coming from higher up, stopped. The insect must have been around there somewhere and it stopped making noises in my presence.

Not to mention that, after you have seen jungle book where Kaa is hiding in the trees, all lianas look like snakes. I finally made my way down without meeting any snakes or weird bugs. My knees were killing me. Down there, at the checkpoint, I had the best Coke in the universe.

On my way down, I met Alin who had gotten bored and was coming up to kill some time.

He spent the hours by a river with those fishy fish who eat the dead skin off your feet. What can I say, his feet look much better now. 🙂 Other than that, I heard he made friends with a crab. And that all the news I got from him.

On the way back, I wish I knew where we ate the best Indian food in the world.

It might have been the hunger talking, but it was to die for. Tikka masala and butter chicken with garlic and cheese naan. Just like god intended after a hike.

In the evening we wanted to have a swim in the sea but we were too exhausted and we ended up at the Shell Cemetery.

I know, I know how that sounds. This place is supposed to be around 125 millions of years old and it carries traces of snails and other shells embedded in layers of lignite. It sounds impressive when you read it at the entrance. But when they ask for 200 Baht (7 USD) to get in, you think “Just about how impressive can this be?”. We had just decided to make a 180, but some other tourists told us it’s free because it’s late. We went on the beach only to find out it wasn’t really that impressive, so totally not worth the 200 Baht we should have paid.

On the way back, because I had 2 Cokes today, I, once again, was caught in the Mission Impossible. Alin couldn’t resist, of course, he started singing too. It was a blast. Today was a blast! If you ever make it here, do rent a scooter. You will not regret it, I promise.

One more thing, it only makes sense to come back to the resort and see Fast & Furious. Ride or die, remember?! I’d prefer the first one, of course. 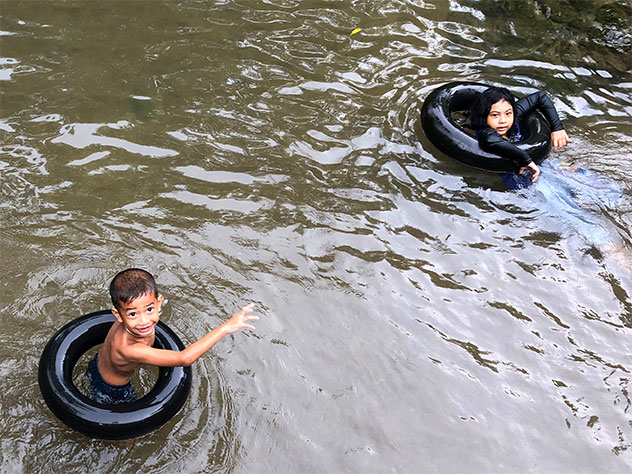 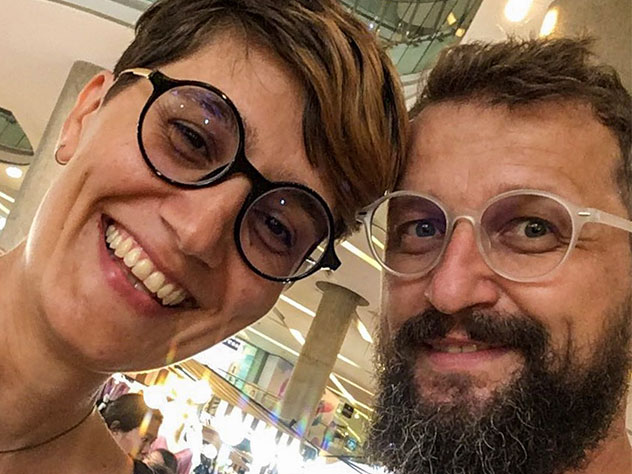 Life Of Two In Asia. Day 31 And Last. Bangkok, Thailand.