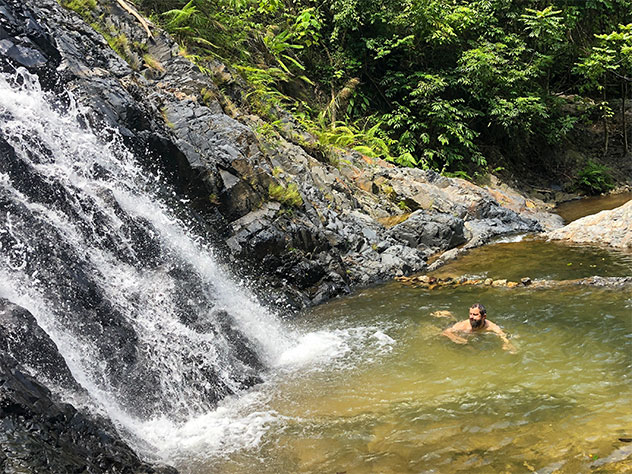 Now, you see, there are two things I wanted to write about, but I can’t decide which one is the best and will make you envy us more. I mean, isn’t that the purpose of (social) media? Today we went to this national park whose name I cannot pronounce. It’s an hour drive by moped from where we stay. And that is a piece of cake if the moped is stable enough and the saddle is not too hard on your bum-bum. But that is another story.

If you come to Thailand and want to see something else than beaches, the best way to discover the authenticity of it is by moped. Rent one (between 6-15 USD/day) and get lost. Seriously. We googled waterfalls or national parks, looked at the pictures and off we went.

This is how we found this impossible-to-pronounce place (name in the title). It really impressed us how well kept it was. Thai people respect nature.

What did we do up there? Well, we bathed in cold clear water and listened to the waterfall. Being the only ones there felt so strange as if we were cheating or something.

The best pancake in the world

We made it back to Aonang, a little exhausted from the heat and really really hungry. We made a thing out of eating Indian food here, I don’t really know why, so we were already dreaming of tikka masala and naan with cheese. But you know how it is with best-laid plans.

We gave back the moped and I was parched. Just couldn’t move anymore. I poured some water on my head, it gave me a bit of a kick but it was no joke. I was KO. Determined to make it to a restaurant, I crossed the street to get one of those freshly squeezed juices. It so happened that the lady was selling Thai pancakes as well. My hunger or sugar craving (it’s impossible to tell the difference sometimes) kicked in like a maniac.

I had not one, but two Thai banana pancakes. Now, these pancakes are slightly crispy and topped with some sugary syrup. The banana gives it aroma and it’s mild. Heaven.

If you remember, I wrote before about the best donut in the world we had on the Phi Phi Island. Well, this was the best pancake. And I realized something. Best anything in the world is not just about it’s … goodness, it’s also about the moment when you eat it, about your mood, about who you are with. I guess it’s safe to say, the best anything is about synchronicity. And I believe that truly, in life, are just very few moments like that and we are lucky if we recognize them.

Side-note to the best pancake in the world

Well, the best anything in the world might be about an alignment of things but you know what? Nobody stops you from trying it again and again. Sometimes, it might even take three pancakes a day. But that is ok. Anything is allowed. On holidays. Or ever. So we went back in the evening for a do-over. Don’t judge. You haven’t been there.

We are back now, watching some Ewan McGregor movie. It feels fairly good to see something new. We have seen The Fast and The Furious 1 & 2 waaaay too many times. While we are at it, Iron Man — 2 times, Die Hard 1 & 2 — at least two times each, Tully — two times. We only have Fox Movies, Fox Sports and BBC here. And no matter what you might say, it feels a million bucks to come back home, have a shower and fall asleep with the remote in your hand and the AC in your face.

Thanks for reading and don’t forget to check out our Instagram!