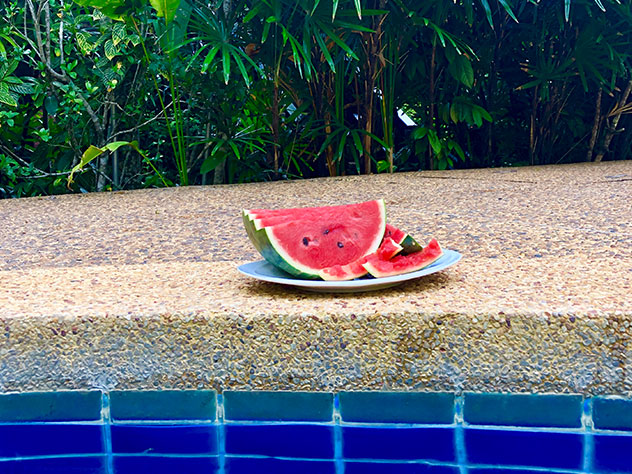 Today was our last day in Aonang so we obviously spent it at the beach. Alin tried to fly the kite again but there wasn’t much wind. He then tried to gather some sea shells but, again, with little success. It seems the tide has swept them all.

We ended up eating some delicious street food instead. Dessert first, how else? Banana Thai pancake, how else? Then, Alin swears by the coconut chicken soup and cashew stew. I had fried noodles. Also good.

We came to the resort, grabbed some watermelon and pineapple on the way which we ate in the pool. Yes, just like those posh people. Only, in this case, we sliced our own food. And we had to clean up after ourselves. Oh, and there was no silver tray.

At the end of our long stay in Aonang, I put down some things you should know if you ever make your way over to this side of Thailand.

Aonang is rather touristic because it’s at the beach. That, however, doesn’t mean you have to have the standard experience. You can find all sorts of accommodation, from the cheap backpacker hostel to 5* resorts, depends on what you want. We chose something more wild, jungley, but I regret the choice. The bed was very hard, bathroom not so clean and there was a leak from the ceiling which kept on pouring every time we used the AC. This place is called Phu Pha resort, in case you want to stir clear.

If you are not a beach person, you can totally pick a place that is more inland and come to Aonang or other beaches by scooter. I actually found some pretty cool places on Airbnb that were more into the jungle. If you are looking for a place to completely disconnect, that is your best bet.

Foodwise, Aonang is full of restaurants with all sorts of food — Western, Thai, Chinese, Indian.

Personally, we loved the Indian food. But you don’t have to go there at all. In the last days, we discovered street food (which is not so visible here, mainly because it’s cheaper). It’s half the price in the restaurants (100 BHT approx 3 USD per portion).

Tourism-wise, everybody in Aonang offers the same kind of experiences.

By boat, there is the 4 island tour, Phi Phi Island and around tour, and some other combinations. By bus, they usually take you to the Tiger Cave temple and The Emerald Pool. By elephant — I don’t know what they do but they call it safari and I hate the idea of riding an elephant. By ATV — something in the jungle I assume, we haven’t checked.

There is, however, much more to do around Aonang, than just those experiences offered on the street. There are plenty of national parks around and all of them are worth exploring. Thai people care a lot about them, sometimes you have to pay a fee, sometimes it’s customary to leave tip, generally speaking, it’s very clean, plastic-free and beautiful.

What to chose? What to do?

My advice is to go in one of the boat tours. Preferably by speedboat and not by traditional Thai long boat. As picturesque as they look, the longboats are incredibly loud and pollute like crazy because they are Diesel-powered. The beaches, any of them, are incredible. Also try snorkeling if you haven’t done it before. I swear there is nothing like it.

The other ‘must’ is to rent a scooter. Beside the mission-impossible-feeling you have, you get to discover the place by yourself and avoid tourists. We went to several national parks and beaches by scooter. Google maps works just fine here.

Some tips on Aonang and Thailand, in general.

Alin brought a mobile router in which we put a Thai sim card. WiFi here usually works decently at the accommodation, but if you go around and need internet access for Google maps, for example, roaming can be quite expensive. You might also want to use maps.me, an offline map we have successfully used in Morocco. Here, however, it did have some inaccuracies. But I am guessing it’s better than nothing.

The biggest tip I can give is do not come here at high-season. I can only assume it’s crowded and, if you are a little antisocial as I am, you might be annoyed. End April –the beginning of May is known to be the beginning of the low-season in SE Asia. We did have some rain in Vietnam, especially in Saigon, but it wasn’t more than an hour a day. Of course, we might have been lucky but you should take it into account.

One last thing I would ask of you is to please refuse, whenever it’s possible, plastic straws or bags or even cups. And tell people ‘plastic is bad for the planet’ or something of a sort. They are surprisingly receptive and don’t look confused. For me, this was a shocker. I tried the same approach in Romania and they looked at me like I was some sort of alien.

That was all from Aonang. Hope you enjoyed our stories. See you in Bangkok next.

Thanks for reading and don’t forget to check our Instagram.

Life Of Two In Asia. Day 28. Trip To Bangkok, Thailand.