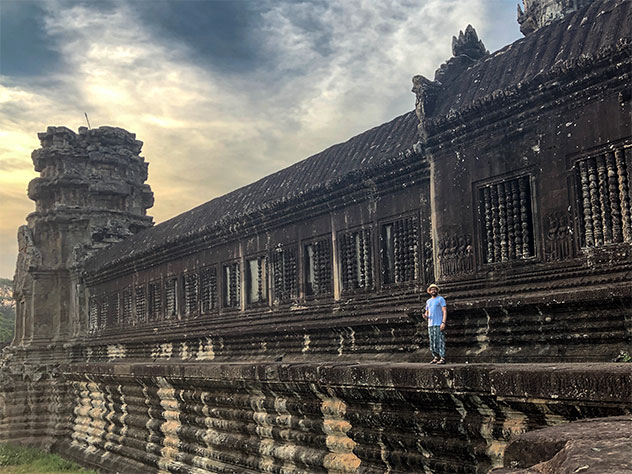 We saw this joke on a t-shirt and found it funny. Angkor whaaaat? To be honest, when I think back at what we’ve seen today, that joke seems really stupid. There is absolutely nothing to joke about that Khmer temple. Khmer are the native Cambodians.

Angkor Wat is without any shadow of a doubt the most impressive place I have seen so far in my life.

I am disappointed by how hollow these words sound. I know I have said it before about things: that they are gorgeous, impressive, amazing, unbelievable … all superlatives. And I am pretty sure they don’t measure up to Angkor Wat.

We said it before, this is not a blog of facts and historical accuracy. This is a place where we say whoooaaaa!!! a lot.

But here are some small details you should know.

Angkor Wat is actually only one, the most famous temple, belonging to a system of temples which covers many square kilometers. Between them, you can go by with a tuk-tuk or, if you are insane, like we were, by foot. We have only managed to visit half of what we had in mind. Going back tomorrow.

Wikipedia in a nutshell.

The temples were built around 1200 AD, some towers first, some galleries later. The Angkor Wat has the longest bas relief in the world (600 m). Funnily enough, it was buried in the jungle for a long time, until some French dude discovered it in 1860. Since then, it’s been reclaimed meter by meter.

Recent radar scans point to some sort of a rural metropolis built around the Angkor Wat. It’s not really known how many inhabitants it had, but estimations go around 200.000 people living and working around Angkor Wat in its glory days. Do you know how many people lived in London at the time? 18.000. Yes, you read it well.
Also, for more reliable and detailed info about this, check out the Wikipedia webpage.

So much about the technicalities. The rest of it it’s just amazement.

If here, you are expected to go and see the temple(s) at sunrise. I think it’s mostly because the temperature makes it easier to appreciate their beauty. But be prepared to fight the hordes of tourists who would do anything for a selfie. Later on, you lose track of each other because the place is so vast.

The end of part one

We haven’t seen all we wanted. That is why we will go back tomorrow. Lucky us we got a three-day ticket — mainly because we queued in the wrong place. Haha!
Stay tuned.