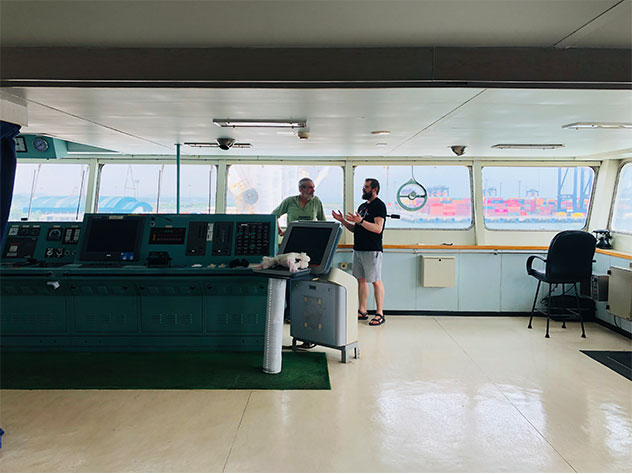 There is only one reason and one reason alone why this post is about something else than Bangkok. That reason is my dad. For those who do not know, he is a sea captain. Coincidentally, he’s been in a port called Laem Chabang, just two hours outside Bangkok. He’s long-promised me he’ll take me with him on one of his trips, has done so only twice thus far. I don’t know for how long he’s still going to do this job, so we couldn’t miss the chance to see him in action. So we went to Laem Chabang.

What does a sea captain do?

People generally say “sailor” but he is not really sailing. His ship doesn’t use wind to sail anymore, but a big fat engine that powers a propeller; it can carry up to 135000 tonnes of various different things (from iron cables to sugar to wood, pretty much anything you can think of); the crew is made of 19 people from various places around the globe who run a smooth operation to bring the cargo from one port to another, wherever there is need.

Growing up, he’s been away a lot. People ask me if that was hard. I don’t know what to tell them. Because honestly, I have learned how to deal with him being away. And we didn’t speak much about that. We enjoyed the time he was on shore.

Another truth be told

He is a tough m* f*, I can say this now, I am old enough. He sees things in black and white, something I have inherited. He is stubborn and doesn’t have time for small talk. This, too, sounds very familiar.

And there is something else. Recently I have come to understand his passion for his job. As a kid, either because I was a girl and I was supposed to do something else, or maybe because when he came home he didn’t want to burden us with his job problems, whatever the reason, he’d never speak much about his work. Not in technical terms anyway. I heard various ports or terms, but they were always words, nothing else. Growing up I started to put the pieces together, I started to get nuances. The way he speaks of his job, of certain colleagues, the way he behaves when on board, they all point to a strange, almost worldly passion for the sea.

I guess it is true what they say for sailors — first love really is the sea.

The only reason I find myself raving about my father here (otherwise this, Mr. Freud, is a rather complicated topic, you were kind of right), is because it hit me again today when we visited him on his metal island. My father is a living example of a person who loves his job. But truly. Madly. Deeply. Irrevocably.

What that entails for the rest of us, his family, that remains for Dr. Freud’s couch. 🙂

PS — Check out our Instagram for more pictures from this day.