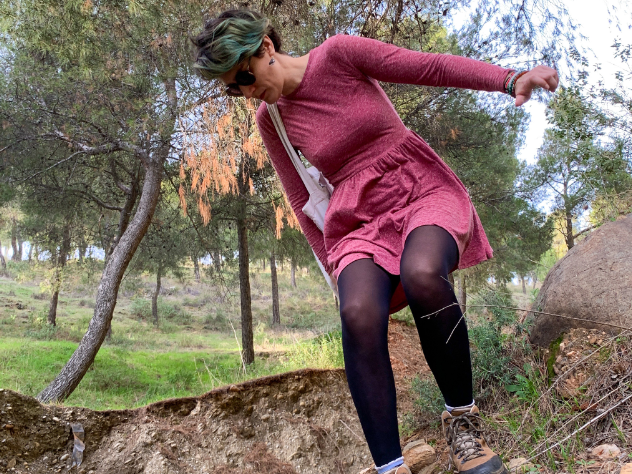 Ok, so do you remember how I said that last post was written in a completely inebriated state? Well, it’s no longer the case. Today we walked for-f*cking-ever, or so it seemed. There were actually only 15-something kilometers. But it was through nature’s wildest. So when we got to the hotel I asked the waitress for a glass of red wine. She said something, at which I answered with ‘Si’, and there I was — a glass in my hand.

Now, I am not a wine person. Anyone who knows me gets that beer is my weapon of choice. But this wine… oh-my-god! I had two glasses. And it doesn’t matter I had half of a pig between the two, I am fiiiiiiiine. And my eyes are very small.

So, what was it with today?

Last night I looked on Google maps trying to understand if it makes sense to rent a scooter or a car to get around. The answer is no. If it’s worth it, I do not know, but we didn’t. We went, again, up-up. Surpassed the Alhambra-people and thought there is nothing waiting for us up there. But, surprise-surprise. It’s amazing. It’s called Mirador de La Abadia. From there, you can see the snowy Sierra Nevada and a whole bunch of olive trees. Oh, by the way, I tried raw olives. Bleah!

Silence. Silence is beautiful. It amazes me how these hills are not more popular. We only met 10 people the entire 6-7 km we spent wobbling around. But it’s better this way. So, make sure that if you ever come to Granada, and you are a bit more agoraphobic like we are, go up. Up till there is up no more. Got it? Good!

After all the up-going, we had to come down at some time. Mweeeeeeell, because we thought we know it better, we decided to follow a stream to the valley. Big mistake for a lady like me who wore stocking and a dress and hiking boots. How else?
There are these plants, these f*cking spiky things that sting like a b*tch. It wasn’t much fun but we made it to a fence, next to some houses. Don’t ask me how we came on the other side of the fence. That is a shameful story.

After pain comes wine. It has to.

We made it to the hotel. 15 kilometers later we made it to a decent chair and food. It was ‘between menus’, whatever the f*ck that means, so we ordered some steak. Holy mother of all that is pure and precious! It was THE steak. Pork, I guess. With some vegetables, I guess. Alin is whispering we had French potatoes — something with sour cream and egg. Whatever, man, all I know it went so good with the red wine I mentioned before.

So now I am in bed, trying to keep Alin awake. And also thinking about what I should have for desert.

The philosophy for today is: come to Spain, go up, eat well and drink wine.

Also do not forget to check out our Instagram.