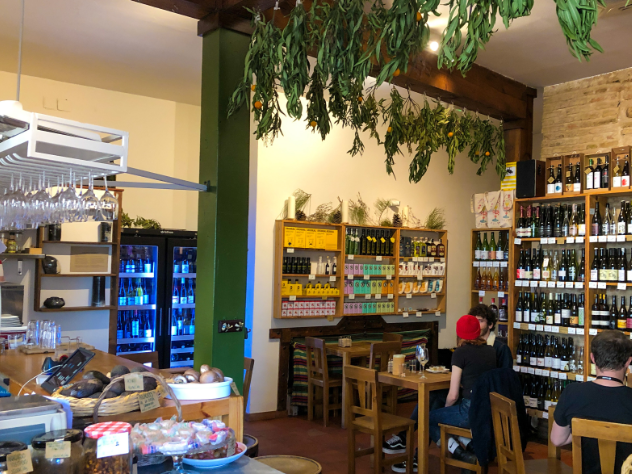 Life Of Two In Spain. Day 5. Granada. About Food.

Today was about food. Good food. But then again we discovered that there are only two types of food here. Good or bad. No in-between.

After breakfast, we walked up to Mirador de San Cristobal.

It’s a nice vista point on a peak, close to a church. How else? We rested there next to a shaggy guy playing the guitar. Flamenco. He didn’t do it very well but his presence mattered so much among the tens of tourists coming up there for a shot and leaving. We sat, listened and enjoyed the luxury of not having to be somewhere else. It makes a huge difference to just sit, watch and listen. At the end, we paid the man. Because that’s what you do when someone made your day a little better.

Where is the food, though, am I right?

Hold on, we are getting there. Coming down from Mirador de San Cristobal we accidentally bumped in Al Sur de Granada. It’s this hipsterish wine/food place where we ate and rested for a bit (you can actually the Alin’s back of the head in the picture). It’s impossible to describe how good it was so I won’t try to find a metaphor. We had some wine, olives and pork confit with roasted paprika. What is pork confit, by the way?

Anyway, if you are in Granada, do come here. The food is good, wine is excellent, the people are nice.

Next, we found a nice plaza where we sat in the sun like reptiles.

We do that a lot.
After absorbing all the sun, we started going back to the hotel. On the way, I thought about some things we noticed around here. They are silly and totally unimportant but check it out.

… I saw plus-size models for the very first time in an average store. So it’s becoming a mainstream thing.

… Shoes are … very unimpressive. You hear about Spanish shoes, right — I mean hello, Camper!, but if you look in shops shoes are boring and totally uninteresting. And I should know, shoes are my thing. Have I not mentioned this before? Ah, not to mention that chicks have a thing for thick heels here, which is not a bad thing per se, but they are ugly, man.

… Women walk in threes. Yep, you read it right. Everywhere you look, chicas are in threes, regardless of age. It’s quite funny.

… People are very thoughtful … or completely careless. Let me explain these two. I mentioned my backache. We were in a supermarket and I couldn’t possibly follow Alin around to find the perfect snack, so I sat on the floor next to a wall. I do look rugged sometimes, but not that rugged. So it’s not because they thought I was a beggar that in five minutes two people stopped to ask me if I was ok. That’s some serious humanity right there. The next thing, completely the opposite, is: I was in the middle of a plaza, it was pretty empty. Suddenly a group of 10-12 people came toward me as if they wanted something. But no, they were casually crossing the plaza. And the next thing I know they stopped around me talking to each other. Absolutely zero sensibility to private space. It’s as if they’d say ‘you can go if you don’t like it’. None of them was rude, I actually found the entire thing quite amusing. And it wasn’t an isolated incident of this kind.

… Jamon goes with everything. Even with pancakes.

… If you come around this time of the year, it gets pretty tricky to find the right clothes. It’s very hot in the sun and very chilly in the shadow.

That being said, I have to mention one final thing about being here.

I can’t say I love it. I can’t say I hate it. Would I be coming here again? I am not sure.
But one thing I know: there is something I can’t quite pin down. It’s not very bohemian, not posh, these people don’t excel at those things. It’s more like they find their way through to you. They inhabit you, little by little. If Marrakech is an explosion, an assault on senses, this place reminds me of a piecewise recomposition of the soul.

Ah, don’t forget to check out our Instagram. We posted a picture of a Santa who hangs himself.