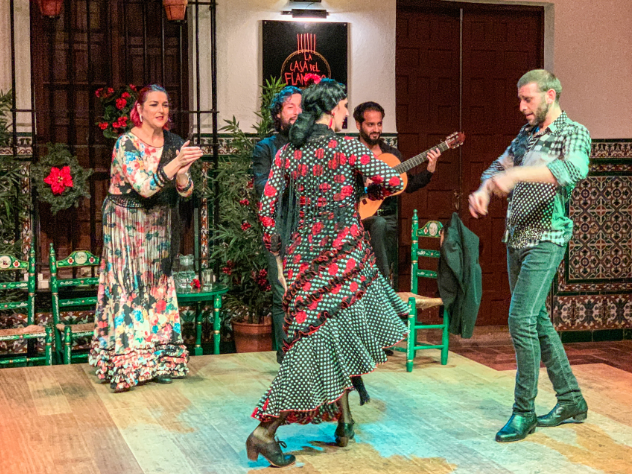 The night between the years came and went. We did the old people’s thing and cozied up on the couch. I don’t know, man, but there comes a time …

There were two highlights today.

One. The Alamillo Bridge of Santiago Calatrava.

Do you know what’s funny? All the Seville guides and websites I checked, none of them mentioned it. It’s all churches and churches and more churches. This goes back a few days to my post about the grandomania of the Cathedral de Sevilla. So, dudes and dudas, if you ever make it here, make sure you check out this bridge. It’s so funky. It’s a cantilever spar cable-stayed bridge, says Wikipedia. Meaning one inclined spar pointing away from the water on one side of the river that pulls tonnes of kilograms of cable that hold the bridge. The end of the spar looks like some sort of a bird or snake. We put pictures of it on our Instagram.

The bridge is even more important if you think that Calatrava pioneered this type of construction with it in 1992. So it’s some sort of a milestone of its kind. Tell it to the guides, ok?

In my opinion, the promenade around the Alamillo is poorly administrated. The landscape is really beautiful, it reminds me of Paris, but it smells like pee everywhere and it’s pretty dirty. It’s quite a shame because we both found it pretty nice.

I saved the best for last.
We came back home tired and not in the mood for going out again but we dragged ourselves to La Casa del Flamenco. And I am so happy we did.

Now, it was my second and Alin’s third time seeing flamenco. The first time was in Malaga. We were both impressed, brought to tears. So this time, we went like a couple of connoisseurs, if you will.

The first piece was something mellow with castanets. At this point, I could see Alin was a bit disappointed. Then, a guitar solo followed. We started to get into the groove.
Then a female dancer performed and our jaws were dropped. Her posture, her grace, her power — this is how believers must feel in front of their god. It was pure rapture.
Then the female singer performed some sort of a ballad/story, which, even if we didn’t understand the lyrics very well, she was so great at transmitting the feeling we were both melting.
At the very end, the male dancer had his solo — I think we will never fully understand or recover from that sublime display of pure energy.

I simply can’t get how somebody, anybody, no matter their background, couldn’t commit to this flamenco. It just takes over you, body and soul. And what really amazes me is that these guys do four or five shows a day and it doesn’t really lose inertia or authenticity. I am no expert, of course, but I have a feeling for things and I don’t think they are diluting their content. They are there. Heart and soul. And feet.

The conclusion is: Live flamenco at least once in your life. You won’t regret it.

Thanks for reading and check out our Instagram where we put a picture of the Alamillo.

Geeks Are Making A Comeback