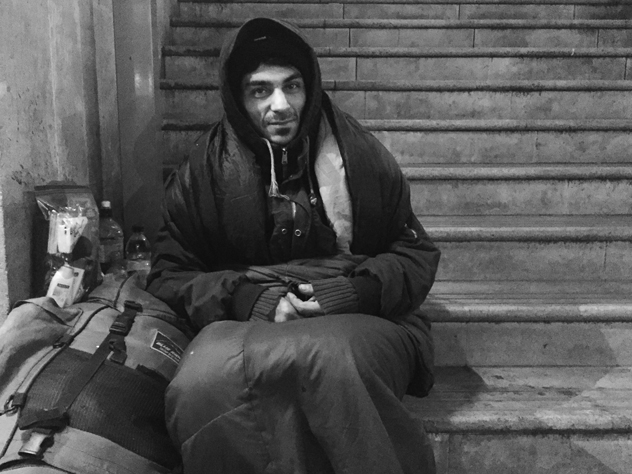 It is cold. It is fucking cold, so I’ll better hurry. I join the human stream heading toward the Victoria underground station, headphones on, listening to an old podcast.
I can’t see outside of the crowd much, but for few seconds, I catch a glimpse of a silhouette on some concrete steps. It is a young man looking like hypnotised at the moving crowd.
For some reason he pierces me with his black eyes. Why me? Why now?
I had to stop.

“Will you tell me your story?” I say, handing over some cash.
He lights up.
“I am an asylum seeker and I came to London back in 2004 for a better life. I come from Iran and last week was my birthday.”
He smiles for a second holding tight the money he just got.
“With no right to work and bad company, for a while, I  was in and out of prison for shoplifting. Man, I did not steal jewellery and shit, I’ve stolen food to eat. Believe me, I did not steal anything else. They got me few times, been to prison, then got back on the streets.”

He stares at the dirty pavement.
“Fuck is cold. I don’t like it here man. He looks ashamed trying to arrange the things in his thick plastic bag.”

I feel helpless and only after I let it out I realise how cruel my question sounds.
“If I were a fairy and able to grant you one wish… what would that be?”
“A job, give me a job,  I’ll take it from there.”
I’m speechless, I wish I hadn’t stopped.
“Can I take a picture of you, man?”
“Sure, I don’t look pretty though.”

I take the damn picture, I shake his hand and get back into the moving crowd. The world feels colder now and for a second I understood. This world can be really cold and it is not all about the damn weather.

The Story of the Pancake