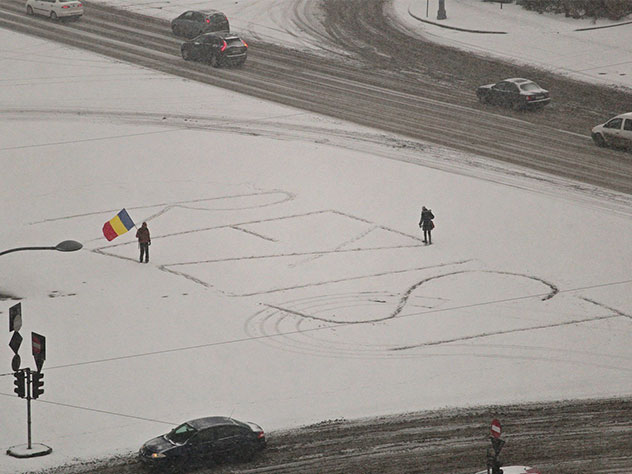 Yesterday, for 8th day in a row, Romania has gotten in the streets. There were considerably less people than the days before, weather started to get colder, but they shared the same unshakable wish to get rid of the corrupted governing the country.

Last Tuesday evening, on the 31st of January, the Government passed an emergency decree (OUG13) that absolved or diminished the penalty of many of the prosecuted politicians. This infuriated hundreds of thousands who started a massive protest.

The President, Klaus Iohannis, addressed the Government, trying to persuade them to retract the decrees, with no avail.

The minister of justice, Florin Iordache, simulated a public consultation on this topic.

After having said there is nothing he can do, People’s Advocate finally appealed to the Constitutional Court and contested OUG 13. The President made an appeal to the Court as well, for checking the constitutional grounds on which OUG 13 was given.

It is worth noting that on the 10th of February, OUG 13 it will become a law and, after this, nothing that can be done.

Further protests in Romania. On Saturday, 4th of February, the Government seemed to back down, adopting another emergency decree, OUG 14, that repealed OUG 13. It seems, however, OUG 14 has certain unconstitutional formulations that might invalidate it further on, implicitly activating OUG 13.

Yesterday, 6th of February, the President of Romania addressed the Parliament. In certain critical situations he is allowed to do that. His speech was harsh, directed at the party in charge, PSD (Social Democratic Party), criticising it for the backward steps Romania has done in just a month after taking power. He used words as “kamikaze strategy” describing the unpopular actions taken by the Government. He pointed out that the resignation of the Minister of Justice would be just a slap on the wrist, while Government’s resignation would be too much of a measure for this crisis. These are the margins, in his opinion, PSD should operate for solving the situation. At this point PSD parliamentarians left the room and the President continued his speech in front of the opposition.

Today started to snow in Romania. Temperatures dropped below 0°C. It will be harder and harder to mobilise the crowd and resist. A few have come in front of the Government and written REZIST in the snow. The start for another day of protests. It is now that pressure is critical. In a few days, the 10 days term will expire and OUG 13 will, probably, activate. I am saying this because very little is known about what is happening with the appeals to the Constitutional Court against OUG 13 made by the President and people’s attorney. It is also not known how badly formulated OUG 14 actually is and if, need it be, would withstand, the process of going through the Constitutional Court.

In addition to that, the most pessimistic scenarios foresee the suspension of the President on grounds of having meddled, through his speeches in the Government and Parliament, in the executive and legislative powers of the state. The same rumours see these speeches as a tactical manoeuvre to gain votes in case of a referendum for suspending the President.

It’s all or nothing.

On one hand we have the Government and PSD (Social Democratic Party). A party whose social democratic doctrine has been replaced by corruption, ruthlessness, manipulation through a nationalistic and populistic agenda. In spite of a few good apples, this party is a bad as cancer and its reformation is, in my opinion, impossible.

On the other hand we have the people and USR (Save Romania Union) and PNL (National Liberal Party). Politically speaking, except for in situ protest of some USR parliamentarians, there is nothing stellar about the two parties. What is really amazing are the hundreds of thousands who protested and are still protesting in the streets. Through their solidarity, they became the true power of the state.

It is remarkable how many countries and people worldwide have seen and heard Romania’s message and showed their support through messages and media articles. I hope this, together with the Romanians standing their ground in Victory Square and all over the world, will put an end to a spreading cancer.