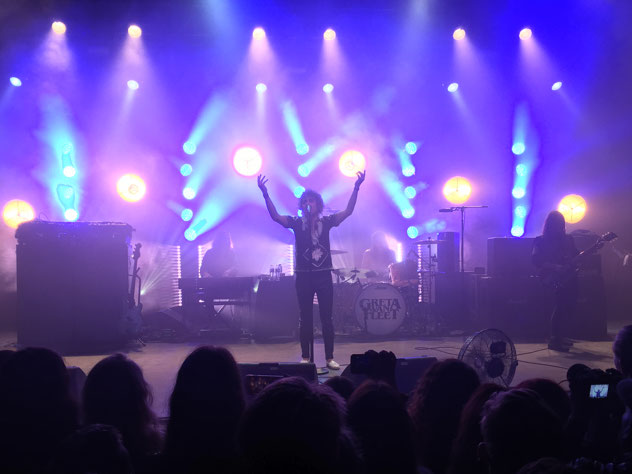 On Monday evening we went out to London to see this young band that has received a lot of attention lately. Yes, it was Greta Van Fleet. After waiting for an hour under a scaffolding in Kentish Town, we got inside and had a very nice surprise. I believe Oana will tell you about it soon enough.

After the warm-up and a long wait, Greta Van Fleet came on stage.

Few white roses were thrown in the crowd (Oana managed to get one) and the show started. No warning, no seat belts, full speed ahead.

It was loud, and good, and loud again.

The room was alive. Young people were trying to make their way close to the stage and a few phones appeared there to capture history.  I was amazed at how very few phones were actually in the air. The general opinion is that Greta sounds like Led Zeppelin. To me, they sound more like Janis Joplin fused with something else. But that is just a problem of every mammal: finding patterns in everything.

For those who do not know, Greta Van Fleet is a rock band from Frankenmuth, Michigan, USA, formed in 2012 out of three brothers and a good friend. The vocalist Josh Kiszka, guitarist Jake Kiszka, bassist Sam Kiszka, and drummer Danny Wagner. All young and somehow hard to associate with the sound they produce. As Oana mentioned few times, it appears that the sound comes from beyond this group of young musicians, from a different time or dimension.

Is it safe to say that rock has a future? Yes!

Not just because Greta Van Fleet was on the stage delivering something unexpected but because their sound hit the room and made it vibrate. I’ve turned around to watch the audience, many were singing. They actually knew the lyrics to an album that was launched weeks before.
I think Greta Van Fleet has to grow, has to mature and become the new breath of rock’n’roll. Led Zeppelin and the monsters from the seventies are a thing of the past. We need fresh blood on the stage but most importantly in the audience.

Maybe Greta Van Fleet won’t be the next Led Zeppelin, maybe they won’t survive, or maybe we become this grumpy-hipsterish-motherfuckers that will complain about everything robbing this young bands of their chance to get out, fail, learn and enjoy life and music. That being said, I think we will have to wait and see.

I will leave you now in the company of my favourite song. Enjoy!

Autumn Of The Matriarchs

How Do You Separate The Artist From The Person?