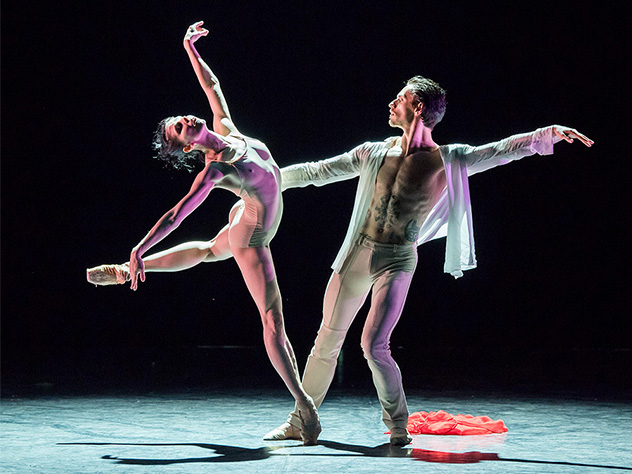 It’s been almost three days since I saw Satori, so much advertised by the (in)famous Sergei Polunin. A few months back I had first discovered him in the documentary Dancer. It was a revelation of a tormented spirit, who was yet graceful beyond anything I might have imagined. When I heard about Satori, I simply bought the ticket, not knowing what to expect. I knew this would be a once in a lifetime thing, so I went.

It opens with the First Solo, seven minutes of Polunin drama, torn between the world’s and his own expectations of himself. If I were to tell you who choreographed this (Andrey Kaydanovskiy), you wouldn’t care anyway. The elements that were really important, the tattoos and grace on display, were all there.

Scriabiniana, the second part, a collection of dances choreographed by the controversed Kasyan Goleizovsky on the music of Alexander Scriabin. As you might have noticed, pretty much all names so far are Russian. We will get to that. Scriabiniana is danced by various people, mostly in mixed pairs, quite resonant names of the European ballet. Sergei Polunin and the Russian star, Natalia Osipova, dance together in this part as well. Osipova is stunning perfection.
The movements are very lyric, very emotional … very Russian. It is considered that this number set the grounds for modern ballet. Everything is well complimented by the mournful music of Scriabin.

It’s very hard to watch the third, and last part, of Satori, which gives the name to the entire show, and wonder what it is about. In comparison to Scriabiniana, Satori is very epic, easy to follow and understand – the struggle of a young boy, gifted ballet dancer, caught between his mom and his dad and their different views of his future. Any resemblance to Polunin’s life is purely coincidental. 🙂
Polunin choreographed the entire thing himself, directed by Gabriel Marcel del Vecchio of Cirque du Soleil, set design signed by David LaChapelle (yes, the same photographer who made Polunin notorious in the video of Hozier, Take Me To Church).

Who Satori was made for.

Now that you know all the useless details about who wrote what or composed which, let’s get to the important bit. I was a bit shocked to read all kinds of bad reviews about Satori. Probably I have no clue about ballet and technique and how I should feel when watching it. Clearly. But let me ask you this: is ballet, or any other show of arts for that matter, made for the critics? Or is it made for the public? If it makes you feel good, like you witnessed some sort of magic thing, is it still bad then? Now we get to that part when we ask ourselves what is the purpose of art.

What Satori was really about.

Sergei Polunin is often called the “bad boy of ballet”. Tattoos, substance abuse, temper, those are the reasons why. But if you dig deeper, I think he is simply a torn artist and person. He falls out of the Procrustean bed that classical ballet set for him and looks for his place somewhere else. This is what Satori is about. The word “satori” means “awakening” in Japanese. The entire performance is the beginning of abandonment of classical ballet. It is a start, maybe not a perfect one, technically speaking, but a start in Polunin’s right direction.
Does it seem a bit heterogenic with Scriabiniana stuck in there? It does. But it does have some delightful parts. Delicate movements wrapped in flowy garments.

In the last part, The Seeker who is looking for his way; inspired by an ever-present muse, Osipova, he confronts all rigid conventions of society, represented by his parents.
I know, I know: “The Seeker? What the hell? Are we in a Greek tragedy?”. Ok, I agree the name is a bit too dramatic, but you can’t argue with the way a person feels. It’s the same answer I would give to all of those accusing Polunin of egomania, making this show about himself. Wasn’t this the premise from the very beginning? The company is called “Project Polunin” after all.

I liked everything about Satori. LaChapelle’s involvement was very clear: a graceful, yet powerful setting, very much in tune with Polunin’s character and story. Costumes made the narrative more palpable and complimented the dancers. I especially liked the mom’s dress – very austere, simple, but nurturing at the same time.

I already knew about famous surreal Natalia Osipova, but she still moved me. How much work and talent one needs to show nothing but perfection is beyond my comprehension.
Little Tom Waddington, the 11-year-old boy who danced young Sergei shows promise. The last image of the night is burned into my brain – an endless pirouette Tom is performing. Kudos to him.

If it were me, I would’ve stroke down some of the lyrical scenes, when the Seeker fights his inner demons. But even so, Polunin doesn’t disappoint. He is pure grace and everything he does when he dances seems effortless and borderline sublime. In my opinion, this balances all the possible negative critiques of his show.
I think there is a bright future waiting for this guy, he just needs a bit of trial and error to find his path.

Monster Sandwich For The Monsters