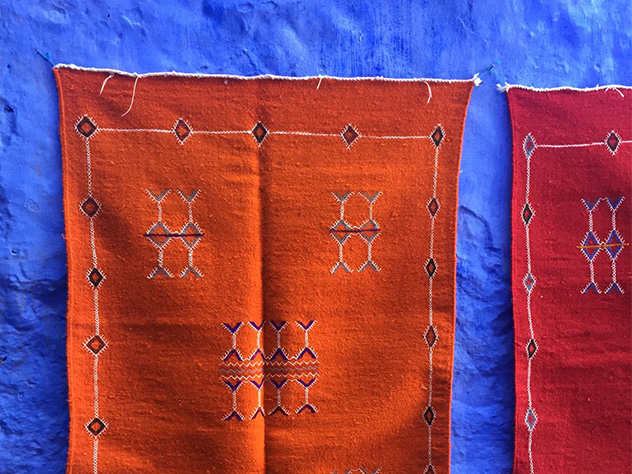 The Legend of the Blue City of Chefchaouen (2)

A while ago, while writing this, I declared I was not really satisfied with the legend of blue colour that made Chefchaouen famous. Some say it was introduced by the Jews, who fled Hitler, during WW2. Others say that it used from practical reasons: it keeps mosquitos away. I could testify to that, since I haven’t gotten stung once, while there. But then again, what mosquitos live in such a dry area?

It was all too shady and boring and uninteresting. So I concluded that Chefchaouen needs a proper legend for it’s blueness. I started writing that legend here. This is the second and last part of that legend.

The Legend of the Blue City of Chefchaouen

We talked all the way into the night, ate and shared stories. She seemed eager to know everything I had seen or lived, allowing for few questions about herself or Hassan.
I went on and on about my life as a nomad, about the peace and quiet, but also about the loneliness I sometimes felt on the road. The beautiful things I had seen don’t really mean much unless you have someone to share them with. Because happiness is not really happiness unless it’s shared. I knew this as a cliche some time ago, but I had come to fully understand why that was. Because it was true.

And I had that. I had that happiness that made me wake up every day with a smile on my face, happy to be alive. And then, he left. One day, like any other day, “Do we need anything else, Heiny?” became the very last words I heard from him. We didn’t need anything else. I only needed him. What I got was a bag of his belongings and an urn with his ashes.

Suddenly the air had become thick. Breathing, eating, waking up in the morning seemed unnecessarily complicated. With the last of my reason I packed a bag and only stopped at the airport. Nobody knew about me. I didn’t know about me. I stopped in Berlin for a while, put some legal affairs in order, visited a friend. Don’t even remember how she looked. Everything was still damped, it felt like a dream still. So off I was. The moment I stepped out of the airplane into the crammed Dubai airport, I felt a little better. All the golden necklaces for sale there, all the unfamiliar faces wrapped in sheets reminded me of nothing at all.
From Dubai I got to Brisbane and then to Auckland. The further I went, the more I forgot. I remember looking at my feet one day and not recognizing them. Red, with blisters. My hands were dry, my skin ached. Wilderness conquered my body, one cell at the time. And then it got a little quieter on the inside. Or so I thought. The fact is, my body was getting too tired to rebel.

I fell sick somewhere around Mumbai and if it weren’t for Meena and her family, I would have probably died of exhaustion and heartache. For some reason I am a lucky girl. One month later I was up on my feet, ready to start running from pain again. But this time I thought I’d do it wiser, allowing myself the time to smell the roses every now and then. Thought that running might have to become a lifestyle from now on, so I’d better learn how to do it properly. I volunteered all the way through Asia, never sticking for longer than three months in one place.

One evening I couldn’t sleep and I was going through some pictures I had taken. In one there was this boy, Rafi, I think, from a village in Myanmar. I had given him the little toy tiger. It was the last palpable reminder I had of the tragedy I was running from. I had thought that, by giving it away, I would be giving away everything there was to know, every memory of him. But I was sadly mistaken. I felt tears welling up, memories ripping me apart, air thickening once more. I dug up the package of cigarettes, lit one up and thought well and hard, just like my grandpa used to do on the wooden chair, in front of the house.

“You have to stop running, Ana. Give in to the pain. Learn to live with it. Let it be part of you, part of everything you do.”

And so I did. I started to go home. Slowly. Very slowly. Kilometre by kilometre, country by country I learned, I am learning still, how to cope with my pain, create with it, write, live through it.

I paused, tears streaming down. They had become a natural extension of my being, so I wasn’t really bothered or ashamed anymore. But they seemed to make Alia a little uncomfortable. She poured some milk in a glass and handed it to me, trying to avoid waking up Hassan, who was now sleeping with his head in his mom’s lap. We were on the terrace, the city of Chefchaouen half asleep at our feet, a slight wind and utter silence. We sat there for a while, through the call for Isha’a prayer, Alia staring at a fixed point in the distance. Her face betrayed no emotion, as if it had never known laughter or cry. Seemed inappropriate to disturb her.

I heard her speaking Arabic to herself, her voice calm, firm and yet soothing. Then she looked me straight in the eyes. “You may sleep here tonight. Now, please, excuse me, I have to put Hassan to bed. Everything you need is in that chest. The bathroom is downstairs, you are welcome to use it.”
She paused and I felt her gaze directly in my brain. It would stay there long after she had gone to bed, poking holes, digging up that endless blue I had run from all the way around the world. Alia left and I made my bed. I had become used to sleeping on the ground, under the stars, using my backpack as a pillow, so this was a new form of luxury – a mattress, some blankets and a real pillow under the intense Moroccan night sky.

I laid there listening. There was no sound except for a cat here and there meowing its love into the warm wind.
A murmur came from the valley. In the beginning, it was faint, like hisper, then it got louder and louder conquering everything, crawling through my pores, straight into my skin, my muscles, my bones, my heart. It hurt, it hurt so damn much I wanted to scream.

There I was again at the hospital to identify the corpse of the love of my life. His bruised face hid those spirited blue eyes under swollen eyelids. It seemed like a bad joke and I must have spent half an hour in the sterile room waiting for him to pop out and laugh “Gotcha!”. He too was probably laughing at the irony of being hit by his dream car, but somewhere else, far away from me. He had only left behind that disfigured body, a bunch of cold flesh that was soon going to start rotting, robbing me of his kindness.
Soon after that, I heard my heart creak. It seemed like all his love and his laughter had left his body and crawled into mine and they were constantly pushing, bending, stretching me. I had started to become too little for it. My insides hurt. It felt like I was dying and giving birth at the same time. I needed more air, more … everything. So I ran but, silly girl, I hadn’t realised that he was with me still. The way he looked at me, through that clear blue ocean, was carved within me.

“Another day in paradise”, I smiled to myself. “Hello, love. Wish you’d see this sky and meet Alia. She’s strange and beautiful, you’d like to photograph her, I am sure.”

I slept the sleep of no dreams. I opened my eyes alarmed by Hassan’s unintelligible screams. He was agitated and pointed somewhere down, in the valley. I rubbed my face, I am not really a morning person, and when my eyes got used to the light, I realized Alia was on the terrace as well, sitting in a chair in the shadow. She smiled and waved at me. She was different shades of blue. So was Hassan. And the terrace. And my bed sheets. And the house. I got up, still relaxed, not really believing my eyes, my brain did have a history of playing pranks on me every now and then. The street was blue, other houses were blue. Everything was blue in the valley, on and on, till further in the desert. Except for the trees. They had stayed green. And myself. I was still … well… me. Except lighter, happier, free from pain.

I looked at Alia. She nodded and continued to smile.

The Legend of the Blue City of Chefchaouen (1)